Who ISN'T a sucker for ooey gooey cinnamon rolls? So soft, so sweet, and perfectly delicious every. dang. time. The sweet frosting on top finishes these perfectly, so they'll satisfy every craving.

Ahh, ooey gooey cinnamon rolls. The perfect breakfast. Actually- who am I kidding?! These are perfect for breakfast, lunch, dinner, midnight snack, and all the times in between.

What's your favorite part of a cinnamon roll? Is it the sweet frosting? The cinnamon swirls? The gooey dough? For me, I love the slight crunch on the top of the cinnamon roll before it gives way to the softest inside. My hubby's favorite part is the ooey gooey cinnamon-y middle.

I'm pretty confident that ANY cinnamon roll is a GOOD cinnamon roll (looking at you, frozen Cinnabons), but sometimes, a girl just needs that homemade goodness. You really can't beat the textures and flavors of a homemade cinnamon roll with the store-bought stuff. So give these a shot, then let me know what you think in the comments!

The dreaded cinnamon roll ingredient. The one that turns people away from homemade cinnamon rolls and breads, and leaves many people without the satisfaction of ever making homemade yeast bread. Well, not today, friends! You're going to make this yeast dough and you're going to succeed! A few tips for your success:

Mixing and proving the dough is one of the hardest parts of making cinnamon rolls! But use the tips below and you'll be bound for success. 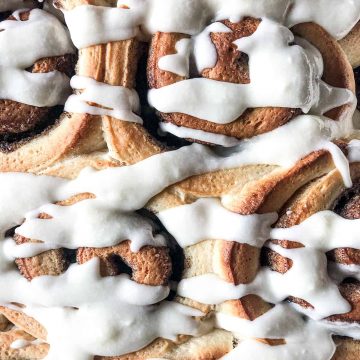 Keyword bread, cinnamon rolls
Tried this recipe?Let us know how it was!

My name is Jo, and I'm so happy you're here! My husband, pup and I live in Georgia, though I'm a midwesterner at heart. I love Jesus, my family, and desserts, and sharing my recipes has been a dream of mine ever since my grandma taught me how to make chocolate chip cookies when I was just 10 years old.