Just like your favorite treats growing up, but made in a way that will make you feel *very* fancy. The classic rice krispie crunch, the stickiness of the marshmallows, and a nutty depth from the brown butter will make these brown butter rice krispie treats the hit of any party!

These brown butter rice krispie treats will be your new favorite treat to say you're whipping up for your kiddos, when really you'll be eating the whole pan (no judgment here).

There's a few things that make these so fantastic. The brown butter adds a depth of flavor that few rice krispie treats ever achieve. Then, the homemade marshmallows add a sweet stickiness without the sickening sweetness associated with their store-bought counterparts. Let's just say- you'll never go back to regular rice krispie treats after you make these.

Marshmallows: This recipe is super fun because you get to make your own marshmallows! As noted in the recipe below, you'll bring the temperature of the sugar mixture up to 240 degrees. I like to use my candy thermometer. If you don't have a candy thermometer (the one I use is linked here), you can use the cold water test. To test the heat of the sugar mixture, spoon a few drops of the sugar mixture into a cup of very cold water. Using your fingers, form the drops into a ball. Remove the ball from the water. If the ball immediately flattens and runs over your finger, it's the right temperature to take off the heat. Then you're done! Follow the rest of the instructions to easily make your own marshmallows 🙂

The Brown Butter: Don't let this part of the recipe hang you up- you've got this! Brown butter is deceivingly easy. You just stick it on the stove, watch it and stir it every so often, and after a short while- voila! Nutty, earthy brown butter is ready to level up all your desserts. To make it flawlessly:

Storage: Store on the counter for up to 5 days. 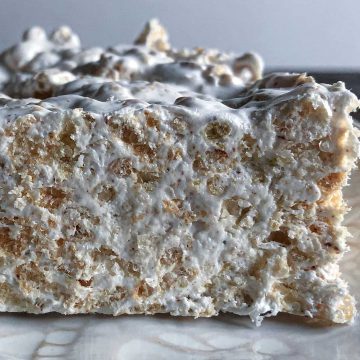 Just like your favorite treats growing up, but made in a way that will make you feel *very* fancy. The classic rice krispie crunch, the stickiness of the marshmallows, and a nutty depth from the brown butter will make these the hit of any party!
5 from 1 vote
Print Recipe Pin Recipe
Prep Time 30 mins
Rest Time 2 hrs
Course Dessert
Servings 20 bars

Keyword bars, brown butter, rice krispie
Tried this recipe?Let us know how it was!

My name is Jo, and I'm so happy you're here! My husband, pup and I live in Georgia, though I'm a midwesterner at heart. I love Jesus, my family, and desserts, and sharing my recipes has been a dream of mine ever since my grandma taught me how to make chocolate chip cookies when I was just 10 years old. Read more here.