My grandma's old fashioned apple pie recipe is one that never goes out of style. It features sweet apples coated in a sugary-cinnamon mix. The crust is made with shortening instead of butter, which really let's the apples shine. And it's all finished off with a crumble topping that is really unrivaled. Some things just don't need to be improved upon.

I don't know about you, but whenever a recipe starts with "Grandma's", I feel like I can automatically trust it, right? Has your grandma ever led you astray on dessert choices? Probably not.

Well, this one is no different, my friends. As I mentioned above, this apple pie is a staple in our family's household. It is featured at almost every family gathering, and rightfully so. The sweet apples tossed in cinnamon with the sweet and salty crumble topping is a pairing that you won't ever be able to get enough of.

Shortening: Shocker! You'll find shortening instead of butter used in the pie crust. I grew up like this, and TBH- I like it better than butter crust! The shortening gives the apples and dutch topping more of a canvas for standing out. Give it a shot!

Granny Smith Apples: Some people are surprised to see that I use granny smith apples in this recipe. Here's the deal- they stay nice and crisp when baking, rather than getting mushy, so they add a wonderful texture to the final product. The bit of sourness from the apples also contrasts wonderfully with the sweetness from the rest of the pie, so instead of a sickeningly sweet bite, you get the perfect amount of sweetness every time.

Dutch Topping: In my opinion, a dutch topping is the best way to top an apple pie. It gives an extra layer of crunch, along with a TON of flavor. I think this'll be your new fav!

Chilling the Shortening: If you can, you'll want to chill the shortening in the fridge for a bit before cutting it into the flour mixture. This will help to keep you from overworking the shortening into the dough, which will ultimately give you the flakiest crust! You can even just chill in the freezer for 10 minutes, if you're short on time.

Cutting in the Shortening: The step in the pie crust section that calls for cutting the shortening into the dough should be short and sweet! There should still be quite a few pea-size chunks leftover in the dough. This will help to create those yummy flakes we're going for!

Chill the Dough: Chill the dough for at least 30 minutes before you roll it out. This will help to keep the shortening from melting into the crust, which will ultimately lead to that flaky crust, just like the "Chilling the Shortening" step above!

Storage: Store covered on the counter for up to 3 days 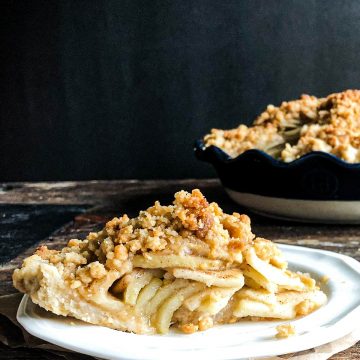 My grandma's old fashioned apple pie recipe is one that never goes out of style. It features sweet apples coated in a sugary-cinnamon mix. The crust is made with shortening instead of butter, which really let's the apples shine. And it's all finished off with a crumble topping that is really unrivaled.
5 from 1 vote
Print Recipe Pin Recipe
Prep Time 1 hr
Cook Time 50 mins
Course Dessert
Servings 12

Store covered on the counter for up to 3 days
Keyword apple, dutch topping, pie
Tried this recipe?Let us know how it was!

My name is Jo, and I'm so happy you're here! My husband, pup and I live in Georgia, though I'm a midwesterner at heart. I love Jesus, my family, and desserts, and sharing my recipes has been a dream of mine ever since my grandma taught me how to make chocolate chip cookies when I was just 10 years old. Read more here.